If you are new to dyeing your hair you may be intimidated by different types of hair coloring products. You may have heard about demi and semi-permanent hair colors. But which one will work for you?

They are also less damaging as they don’t contain developer and don’t penetrate into the hair cortex as opposed to semi-permanent dyes. Keep on reading if you want to learn more about semi and demi-permanent hair dyes and their differences.

What is a Semi-Permanent Hair Color?

Semi-permanent dyes are the way to go for those who are not ready for dramatic hair changes and simply want to experiment with their image a bit.

In contrast with typical permanent dyes, temporary hair colors do not contain ammonia and a developer. These two substances, as you may know, can be very damaging to the hair if overused or applied incorrectly.

Additionally, if you have fine or severely damaged hair, ammonia and the developer can interfere with the hair quality. Developer in hair dyes contains hydrogen peroxide.

If used inappropriately, it can even give your scalp a chemical burn.

Therefore, the fact that semi-permanent hair dyes are free of ammonia and developer makes them a good choice for people who have weak hair or damaged scalp.

These names are justified as semi-permanent dyes do not change the hair color as much as they alter the tone. In addition to this, some people find that temporary dyes give the hair a nice shine. 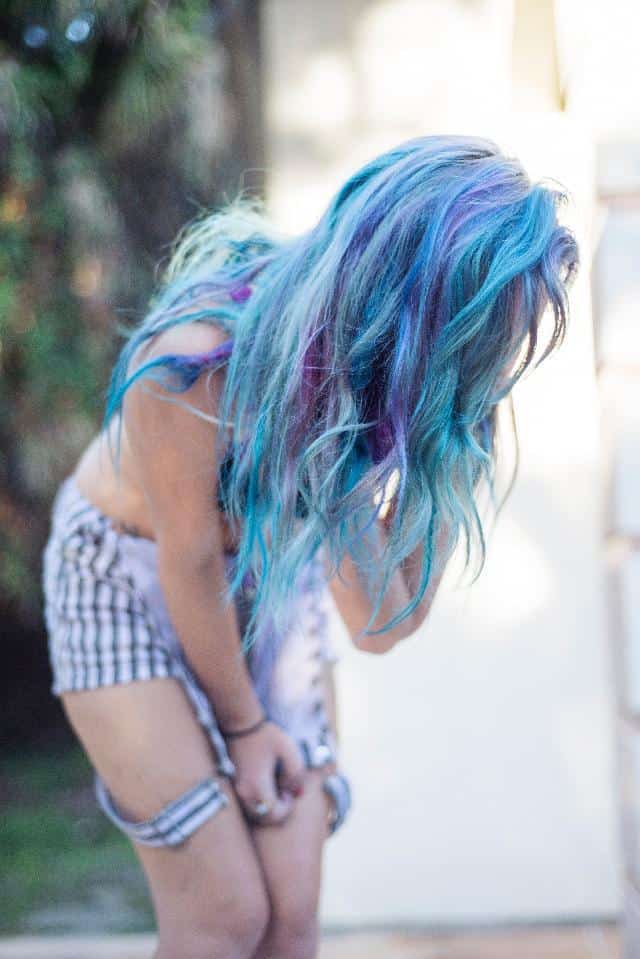 Also Read: How to Dye Your Dark Hair Purple Without Bleaching it?

Semi-permanent hair dyes have a range of advantages. Not only they do not require as much commitment as temporary hair colors do but they are also easy to use for starters.

Temporary hair colors are very user-friendly as there are no proportions of the dye and developer to be taken care of. You simply need to put the dye on the sections of your hair using the bottle-applicator most semi-permanent hair colors come in.

The most appealing part about semi-permanent dyes is that they wash out fairly easily.

If you don’t like the color, you will not have to wear it for too long. For some people, the short-lasting power of temporary hair dyes is a disadvantage. However, it is nothing that the name doesn’t imply.

If you have ever colored your hair blond, you may know the struggle of the yellow tone appearing in the hair after a few washes. Temporary hair dyes can be a solution for those who struggle with changes in the tone of the hair after spending a lot of time and money to get the desired result.

So, if your platinum hair is turning yellow, or you are a brunette turning brassy, you can consult with your hair professional to use low-pigment temporary dyes to maintain the color in-between the visits.

What is a Demi-Permanent Hair Color?

Because of the hydrogen peroxide content in the dye, demi-permanent dyes can be used to darken the hair color.

It may take you up to 25 shampoos to get it faded. Thus, if you choose demi-permanent hair color and want to stick to it instead of using the more damaging hair dyes, try to wash your hair as less as you possibly can.

However, it is certainly less than permanent dyes do. As the hair cuticles are slightly opened, your hair may get a little dry or frizzy after applying demi-permanent dye to your hair.

When Should You Use a Demi-Permanent Hair Color?

Just like semi-permanent hair colors, demi-permanent dyes are a great way to try out a trendy color or a hue you have always wanted to try. It is less of a risk than coloring your hair with a permanent dye as it will fade out after a few washes and quite smoothly.

While you may be irritated by the short-lasting power of semi-permanent dyes, demi-permanent ones are the perfect option to try out new hair colors without much commitment and minimal damage to the hair.

Demi-permanent hair colors are also great if you want to give your hair a boost.

If you feel like your hair needs some shine and richer color, then these dyes may be a good solution for that. Just like semi-permanent ones, they also give the hair a glossy finish. However, take into account that any product may have a damaging and drying effect if your hair is not healthy enough.

Perhaps the best part about demi-permanent hair colors is that your roots are less visible.

As these hair dyes fade gradually without leaving harsh lines, outgrown roots are less noticeable. Thus, you can also use demi-permanent hair colors to color your roots or deal with the grey hair for a short period of time.

Demi-permanents dyes are easier to use than permanent hair dyes which makes them more suitable for your at-home coloring sessions.

What Are the Differences Between Demi and Semi-Permanent Hair Dyes?

Both semi and demi-permanent hair dyes don’t have ammonia in their ingredient list. This makes them temporary and the color washes out eventually.

Using semi-permanent hair dyes in between the visits to your hair colorist is a good way to maintain the color if your visits are not occasional.

Demi-permanent hair colors, on the other hand, are not suitable for this matter as they take more weeks to wash all out and have a stronger impact on the hair color. Thus, they may interfere with the coloring process and in the final result.

Because of the difference in their formulas, semi and demi-permanent hair color work differently which is closely related to the lasting power.

As semi-permanent dyes are free of such harsh ingredients as ammonia and hydrogen peroxide, they act a ‘layer’ on the hair strands giving them a certain tone.

Meanwhile, demi-permanent dyes work more like permanent dyes to some extent. The small amount of hydrogen peroxide that these dyes contain opens the cuticle and slightly penetrates into the hair cortex.

Thus, the deeper the product goes the more long-lasting the hair dye is.

Semi-permanent hair dyes fade quite quickly as they contain ammonia or peroxide and do not penetrate into the hair cortex. They simply give the hair a slight ‘tint’ and you may experience fading from the first wash.

Demi-permanent hair colors, on the other hand, penetrate into the hair cortex and thus have a longer-lasting power. They contain a small number of developers which contributes to the lasting power.

Both types of hair dyes eventually fade away, the only difference is the timing.

Which One is Better?

If you are looking into dyeing your hair but do not know what hair dye to choose – semi or demi-permanent, you first need to decide for how long you need the color to stay on your hair.

If you are someone that likes experimenting with the hair color, semi-permanent hair dyes are a better choice. They fade away much quickly and easily if needed.

Nonetheless, it is always recommended to consult with a hair colorist for the best advice. The type of hair dye you will need to use depends not only on the results you want to achieve but also on your current hair color.

I am a writer, journalist and nonconformist blogger. I was born and raised in Bucharest, Romania. When it comes to writing, I like to explore every topic I find to be interesting and I get out all the details about it. I published several books and wrote for national & international publications. Looking forward to share my writing with all you, readers so we can learn new things together with every post!

link to How to Cover Red Hair Dye with Brown?

Red is the most difficult color to remove. The process of transforming your hair color into brown will depend on two factors including the shade of brown you want to achieve. And the intensity of red...

Continue Reading
link to What Will Happen If You Don’t Cut Your Split Ends?

When the protective layer of your hair is damaged, split ends occur. Unfortunately, dealing with them is the most challenging part of any hair care routine. Whether you have straight or curly...

We believe that every woman is beautiful and needs to build her self confidence with every step she takes. And we are willing to guide you on this path of self-improvement that will make you be in charge of your own beauty! All of us have a unique style and you can discover yours with “Living Gorgeous” today!